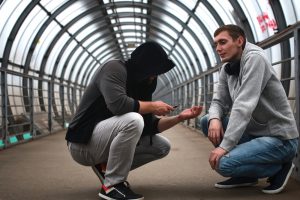 Films need different types of sound effects to be compelling and entertaining. Before sound effects, a silent movie would play while a pianist added context and emotion to the movie. Once movies became talkies it was important to enhance the audience’s experience through audio and music. The use of Foley techniques became the standard in the movie industry for adding sound effects to enhance films.

What are Foley Sound Effects?

There are three main types of Foley effects: footsteps, movement and props. To recreate footsteps, Foley artists walk on the same surface as the actor in similar shoes. A Foley pit can be utilized with different flooring that allows the Foley artist to record the actor walking through different terrain. Footsteps also include animal’s movements, like the sound of horses galloping. Movement in Foley effects focuses on the sound of textiles, whether it is the sound of a leather jacket or people rushing by each other.

What are Foley Props?

Foley techniques are for projects of all budgets. Many low-budget film makers and TV commercial producers use Foley techniques to enhance their production’s sound design. Whether recreating the sound of footsteps, fighting scenes or clothes rustling as two actors pass each other, Foley effects enhance the film’s production.

How to Create Foley Sounds

Jack Foley began his career directing silent films and later recreate sounds when talkies were introduced. He honed is craft with radio, where action in dialogue required sound effects to enhance the story.

Films need different types of sound to captivate audiences. Foley’s use in all films helps engage audiences through sound. Historical documentaries use Foley to illustrate visions of war. Adding the sound of a bomb dropping or an army marching can make the film come to life.

Some of the most captivating Foley sounds come from the Star Wars movies. Natural sounds help to create some of the greatest sounds in the original trilogy. The iconic lightsaber sound was created by recording the microphone feedback from a tube TV.

Other classic films have used Foley sound techniques to enhance dramatic scenes. In Raiders of the Lost Ark, the sound of a boulder rolling was re-created by rolling a car without its motor running. In Terminator 2, the sound of crushing skulls is re-created by smashing pistachios. In Jurassic Park, Foley artists used an ice cream cone to mimic a velociraptor hatching. Many sound designers believe Foley techniques are the best way to re-create sounds for film and TV.

Did learning about the different types of Foley sound techniques interest you? The Institute of Production and Recording (IPR) offers a program in Sound Design for Visual Media that teaches students about Foley techniques.

The Sound Design for Visual Media program is an occupational degree program that immerses the student in the world and industry of sound design for visual media. Students in class learn key skills and concepts necessary to meet the demands of a large-scale audio/visual media project. These skills and concepts include advanced sound design, synchronization, sound effects creation, field and location audio recording, boom operation, ADR recording and editing, Foley recording and editing, the creation and recording of music for visual media programs, and the audible mixing of these elements together. Students will also learn how to make correct aesthetic decisions for the project they are working on, gain important organizational skills that include logging and archiving of media materials. Students learn to achieve the skills necessary to advertise and market the final product.

Contact us today to learn more about the sound design for visual media program and starting a rewarding career in the audio industry.