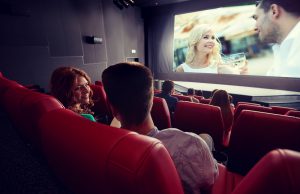 Interested in learning how film scoring works? In an introduction class to music scoring for visual media, students learn the theory and practice of spotting music to picture, composing music in different styles, arranging and orchestration for live and electronic music, and the business and practice of film scoring.

After receiving your degree in sound design for visual media, you will be able to start a career in film scoring as an assistant to the composer, or composer in film, television, video games, live performance. There are also copyist positions that proofread scores and prepare parts for performances and recording sessions. Further, a career as a music editor allows you to edit and sync the music used in film with the action on screen. Careers in film scoring and sound design allow you to be creative and please audiences of movie goers.

What is Film Scoring?

Before the composer begins writing music,  the director and composer get together to watch the film and decide what music goes where. This way a composer is able to match the director’s vision for the film.

The Tools of the Trade

MIDI – Musical Instrument Digital Interface (MIDI) is a language that allows computers, musical instruments and audio hardware to communicate. Most common MIDI setups use sequencers to record, edit, send and playback data. The sequencer acts as the hub for the track by sending instructions to set up, record, and keep track of the overall arrangement. MIDI events include pitches, notes, velocity, aftertouch, tempo, panning, modulation and volume.

Why Use Music in Film

Most importantly, film scores help tell a story. The composer must have an ability to tell a story with music. The composer will also need to understand the story being told in the film. Music helps the film move from one scene to the next and set the mood of the scene. Music in film scoring can also set the tone for a character whether hero or villain. Finally, music can be used to keep a slow scene from dragging on.

Most every film score needs a composer whether they are sitting in their home studio or conducting an orchestra. Some of the more well know composers of film scores include James Horner, Hans Zimmer, John Williams, Daft Punk and Danny Elfman.

James Horner – composer of the Titanic film score. Attended the Royal College of Music in London and received a bachelor’s and master’s degree from UCLA.

Hans Zimmer – The artful composer of Gladiator, Pirates of the Caribbean, The Dark Knight and The Buggles, Video Killed the Radio Star He is recognized as an innovative musical composer of the first video to be played on MTV.

Danny Elfman – composer for movies including Spider Man, Batman, Planet of the Apes and TV show The Simpsons.

The Sound Design for Visual Media program is an occupational degree program that immerses the student in the world and industry of sound design for visual media. Students in class learn key skills and concepts necessary to meet the demands of a large-scale audio/visual media project. These skills and concepts include advanced sound design, synchronization, sound effects creation, field and location audio recording, boom operation, ADR recording and editing, Foley recording and editing, the creation and recording of music for visual media programs, and the audible mixing of these elements together. At a higher level, students will also learn how to make the correct aesthetic decisions for the project they are working on, gain important organizational skills that include logging and archiving of media materials, and achieve the skills necessary to advertise and market the final product.

From small-scale, low-budget independent documentaries to multimillion dollar feature films, graduates will be well prepared for this exciting and rewarding industry.