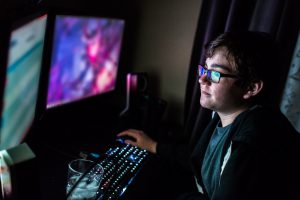 Music has been used in video games since the beginning. When the music speeds up as you progress through the levels of Pac-Man, you know that Inky, Blinky, Pinky, and Clyde are going to get you sooner or later. Although not as simple as the 70s or 80s, music in video games has become an artform. It can help to tell a story, getting you in the right mindset and entertaining you while playing your favorite video game.  Are you asking yourself, “Why use music in video games?” Getting a degree at a music vocational school will help you answer this question and get you ready to make music for video games.

Why Use Music in Video Games?

Most importantly, music in video games helps create a mood. Many video games are story based and the music can help tell the story. Music can create a sense of time or place within a video game. Is it medieval times or set in the future? Music can help the video gamer get into the mindset of the time and place that the video game is set in. Music in video games can also set the tone for a character whether hero or villain. Music is a great way to preempt what is about to happen. If you are about to die, your heartbeat can get faster or hear music that tells you someone is coming for you. For this reason, music can affect how the player emotionally reacts in a gaming scenario. Good use of music in video games can make the experience.

Stages of Video Game Production of Sound Design and Score

According to a video entitled Video Game Composers – The Five Critical Skills, there are 5 small blocks in a video game that help the video gamer traverse the game play.

Introduction – helps set the mood and gets the video gamer in the mindset of what is about to happen.

Loop – a short, repeatable track that can be played over and over until the scene ends.

Transition – music that helps the video gamer transition between scenes

Stinger – a sound that represents some important event in the video game.

Tag – a sound that closes the level or section of the video game.

The Future of Video Games

The immediate future of game play is a wave of new game designers, growing the need for good sound designers. With new video game creation software and music software, many amateurs and professionals alike will explore sound design for video games. The barriers to entry will be broken down, however to truly become a professional sound designer it will take lots of practice as some education from production and recording schools.

Did learning about sound design in video games interest you? The Institute of Production and Recording (IPR) offers a program in Sound Design for Visual Media that teaches students about video game music creation.

The Sound Design for Visual Media program is an occupational degree program that immerses the student in the industry of sound design for visual media. Students learn key skills and concepts necessary to meet the demands of a large-scale audio/visual media project. These skills and concepts include advanced sound design, synchronization, sound effects creation, field and location audio recording, boom operation, ADR recording and editing, Foley recording and editing, the creation and recording of music for visual media programs, and the audible mixing of these elements together. At a higher level, students also learn how to make the correct aesthetic decisions for the project they are working on, organizational skills that include archiving of media materials, and achieve the skills necessary to advertise and market the final product.

Contact us today to learn more about the Sound Design for Visual Media program and starting a rewarding career in the video game industry.