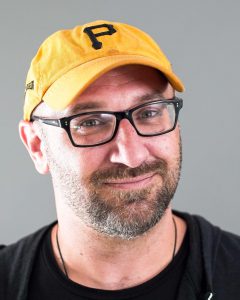 Pittsburgh native Andrew Hunt began making films at the age of 11 with a borrowed video camera and an army of neighborhood friends.

Later, Andrew would study filmmaking at the School of Visual Arts in New York City. Soon after, he began working professionally as a writer/director on television commercials, documentaries, short films and music videos.

In 2007, Andrew was selected by Steven Spielberg to be a contestant on the Fox Reality series, “On The Lot.” He placed top six out of 12,000 filmmakers. Next, Andrew jumped into the world of television, where he became a showrunner on a variety of documentary dramas.

In August 2015, Andrew wrapped production on his directorial debut, “Miles Between Us,” and is in development on his second feature, entitled “Deadmen.” Finally, Andrew’s 10-part Web series, “Gods@Play,” debuted in 2015.

Andrew teaches production and screenwriting classes in both the AAS and BFA degree programs and mentors students in the development and production of their culminating video projects.