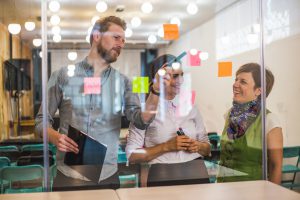 Every level of media production goes through many stages of development.  Regardless if a production is a high-budget Hollywood feature or a simple commercial, there are many factors a to consider before filming. With even smaller productions, production is expensive. A lot of prep-work happens during the process to make sure things run smoothly. Planning the best way to tell a story can involve drawing, illustration, storyboards, look-books and animatics.

Various types of visual representations during production help keep a teams on track. Utilization of these concepts is the most important aspect when taking a project idea from scratch to the screen. Here are the several stages where visual storytelling aids production.

One of the most important parts of a project’s early development is that first communication of an idea. Sometimes our words will only take us so far when explaining ideas. That is where drawings and illustration come into play. Whether it is the initial pitch of a project to a decision-maker or changes during filming, using sketches can help in production.

It is easy to confuse drawing with illustration. They are actually very different. In film, drawings are the first representation of an idea. A drawing is also, by definition, a 2D rendering. It can be a sketch, outline, or something more intricate. This is especially important in genre films. Some examples would be sci-fi, superhero, and historical films. Drawings are integral in these genres for things like costume design. Illustrating, on the other hand, gives the viewer a visual rendering of an entire concept. An illustration may also incorporate graphs and text. While a drawing may exist in and of itself, an illustration explains the entire concept. Both are vital in the early stages of visual storytelling.

Storyboards create a visual representation of a production in sequence using graphic panels (think comic books as an approximation) to show how a story is shot. There are a few lines of text on each panel helping it explain what is happening. Storyboards are vital for productions and provide a visual map of how the filming will take place shot-for-shot.

Without the use of storyboards ahead of filming, it is difficult to direct the flow of a production and predict hurdles in filming. The storyboard also helps to ensure that the crew is on the same page with the director. Storyboards can be created on a computer or traditionally. Screencrush has a great rundown of some storyboards for several well-known films .

A lookbook is a collection of photographs of costumes, locales, and helps to convey the vibe of a production. The lookbook can establish framing devices, lighting, character emotions, backstory, set-design, and other details. The lookbook breaks down the concept scene-by-scene. This is a fun activity for creative-minded individuals that are drawn to activities like establishing a certain aesthetic and branding.

A successful lookbook illustrates the feel of the production. The lookbook is represented in a booklet or digitally. The lookbook can include everything from visual representations, along with plot summary, music score notes, and song suggestions. When creating a proper lookbook, it should assist in establishing the mood of the film.

Animatics is usually the final stage before filming. When putting together a rough cut, a filmmaker may opt to include animatics to depict what will happen in the story before it is shot. Animatics are the use of animated storyboards to convey what will happen. The animatics can incorporate aspects of the earlier stages of visuals including drawings, illustrations, storyboards, and lookbooks.

Before computers, animatics were created in the traditional style of animation. Traditional animation involves several storyboard panels photographed and shown in rapid succession, like old cartoons.

Animatics are now made on computers, utilizing various methods. Animatics are rendered in 2D, incorporate 3D models of objects, or a combination of both. Often, the animatic for a production can end up looking very close to the finished product.

Now that you know the myriad of ways that the use of visual aides goes into the development of a production, perhaps you might better understand the need for highly trained digital video and media production assistants in the film industry. Even on smaller projects, some combination of drawings, illustration, storyboards, look-books, and animatics are likely to be incorporated into the creative process. Knowing something about each of these stages will help you prepare for whatever projects you take on after graduation. Utilization of these concepts in each stage of planning can be a major factor in minimizing the problems one might run into during pre-production, filming, and post-production.

Interested in learning more about drawing, illustration, storyboards, look-books and animatics? IPR’s digital video and media production associate and bachelor’s degree programs can lead to a variety of entry points in the video and film production industry. We help you build a strong visual portfolio for your career search through time in our studios.

Contact us today to learn more about the digital video and media production associate and bachelor’s degree. Starting a rewarding career in digital video production is closer than you may think!