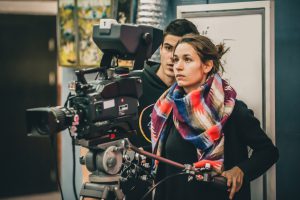 Historically speaking, movie-making is still fairly new. Just a few generations ago, the idea of watching images move on a screen instead of live people acting it out as part of a stage production would have seemed like magic. Over the centuries, movie making has evolved from lantern shows to digital movie masterpieces. Learning the history of moving making will make you a better associate producer or production manager.

The earliest precursor of motion pictures was the magic-lantern. Lantern shows came to be in the 1650s, and were a very popular form of entertainment. These devices rely on a light source to illuminate slides that would change every thirty seconds. Small home versions would use a candle for illumination.

For public lantern shows, the use of limelight is created from a reaction when oxygen and hydrogen are squeezed onto limestone. This process makes a light look as big as a modern movie theater. This light would show hand-colored slides on a large screen. Musicians of the time would provide soundtrack. Audiences and performers would add dramatic sounds as an accompaniment. Some innovators figured out how to incorporate special effects. The most celebrated practitioner of this artform was Joseph Boggs Beale. His lantern shows had up to two-thousand slides in one story, utilized close-ups, change of perspective, dissolves, zooms, and pans to move the story along.

When taking a picture with a film camera, it captures a moment in time utilizing reflections of visible light that are in view from the camera’s lens. A chemical reaction occurs and then that saved image can be ‘developed’ for use in a photo laboratory. Movies, in their simplest form, included many photos taken and then processed on a roll in sequence. These photos were projected so that the images cycled through quickly enough to move in a lifelike way. Likely the earliest hit film was the 12 minute “The Great Train Robbery” that came out in 1903. The first feature-length drama was “The Story of The Kelly Gang” out of Australia in 1906.

For the first several years of movie-making, no one involved in the making of the films got credit. The studios behind the movies believed that if they did so, the people onscreen could demand more money for payment if popular. Florence Lawrence appeared in over 100 films for one studio called Biograph. Thus, the public came to call her ‘The Biograph Girl’. When the studio got wind of her talking to other studios, she was fired. Rival studio faked her death by saying she was hit by a streetcar. They then put out an ad blaming other studios for the lie, declaring her alive, announcing her name and that she would now be in their movies. It worked, and the first movie star was born.

The Jazz Singer & The Beginning of Talkies

The first successful feature-length film to incorporate dialogue was The Jazz Singer in 1927. It was still a silent film aside from two key scenes that had the star of the film, Al Jolson, singing songs and reciting dialogue. Within a few of years, the first full talkie film was produced, “The Lights Of New York.” Shortly thereafter, Hollywood produced over three-hundred talkies. Talkies becoming the norm, phasing out silent films.

Musicals During the Great Depression

During a period of the 1930s, known as The Great Depression, a large part of the population of the United States was financially challenged. This was due to that after-effects of the stock-market crash of 1929. Also, land began to dry out so that it was useless agriculturally. So, farms could not operate. Hollywood responded to the diminished outlook of the public by creating lavish musicals to gets audiences to not focus on their problems. Instead, they could watch larger-than-life productions of people singing and dancing their way through elaborate numbers, sometimes with the thinnest of plots to tie the whole movie together. This is an early example of the idea of Hollywood escapism.

The Director as Star

Auteur theory is the idea that the film’s director was the main contributor towards the film’s creation championed. Before the rise of this idea, the director of the film was an anonymous person. This began to change with French filmmaker and critic Francois Truffaut who published a piece that functioned as a call to action. This call to action was a demand to establish the director as the ultimate author (auteur) of the narrative film. This had audiences begin to champion directors like Alfred Hitchcock. People began to get excited for a director’s next film, regardless of who was acting in it. This practice of holding the director’s worth of being on the marquee extends into modern-day, from Steven Spielberg to Quentin Tarantino.

The Drive-In and The Multiplex

Going to the movies was once a special event. Many movie theaters were places designed with emphasis on the word theater. They were opulent structures that had chandeliers, huge vaulted ceilings, and lots of woodwork. Even in smaller regions, the one-screen theater was an epicenter of cultural activity. Movie-going became so popular, it made sense to begin creating movie-houses that could show more than one move at a time. These multiplexes accommodate more fans with more showings, and also different films for different demographics. Less money went towards the aesthetic of a single space and more went to uniformity of viewing areas, with ever-increasing advances in sound and seat-comfort.

A drive-in is an outdoor movie experience where you drive in and park to watch the movie. Instead of sitting in a movie theater, your seats are in the privacy of your own automobile (this made drive-ins a popular and affordable date option as well as for families). For sound, there were little speaker-boxes affixed to small poles or to a rolled-down window. Now you can turn to a radio frequency on your car’s stereo to use the car’s sound system. Drive-ins popped up in the thirties, becoming widespread in the fifties. The downside of drive-ins has always been that the films shown depended on weather conditions, so drive-in operations tend to be seasonal.

The Rise of Independent Film

As early as the 1950s, filmmakers became frustrated with the constraints to creativity provided by the movie studio system. Filmmakers would apply a DIY work-ethic to their film-making, finding ways to fund the films that didn’t rely on movie studio money. John Cassavetes would continue to work in Hollywood on mainstream studio fare, to then use that money to finance his own independent work. Filmmakers and producers came to prominence like William Castle and Roger Corman. They made schlock fare cheaply, directed at the teen market. These movies included horror films, racing films, and others teen oriented films. Many prominent blockbuster filmmakers of today got their start shooting these independent movies for people like Roger Corman.

The Switch from Film to Digital

Every theater that showed a film at its release, would get a ‘print’ made from a master and projected on a movie screen. This was a costly process impacting the film’s reach. To make films more profitable, movie studios began switching to a digital format. The first major digital format movie made was Star Wars: Episode II-Attack of the Clones. Instead of individual films, movies were shown on all theaters at once. Despite the switch from film to digital, there are many that still prefer the look and feel of actual film. They also prefer to continue making films that way, even though it will be digitized for distribution purposes.

Interested in learning more about movie making and digital video production? IPR’s digital video and media production associate and bachelor’s degree programs can lead to a variety of entry points in the video and film production industry. We help you build a strong visual portfolio for your career search through time in our studios.

Contact us today to learn more about the digital video and media production associate and bachelor’s degree. Starting a rewarding career as a movie maker is closer than you may think!