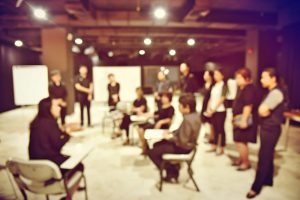 What Does an Associate Producer Do?

What Does a Producer Do?

According to the Producers Guild of America, the producer initiates, coordinates, supervises and controls all aspects of the film and television production process. This includes creative, financial, technological and administrative processes.

Skills Needed to Do the Associate Producer Job

Do you have one or more of the following skills to do an associate producer job? If you have some of the skills, the rest can be learned at a vocational school, externship and on the job. A successful associate producer will be good at multi-tasking, deadline sensitive, resolver of problems, a good supervisor and leader, innovative and creative and have the technical skills to us different types of tools and production equipment.

Multi-Tasking – the associate producer manages multiple tasks to get the TV program or film through each stage of  production. They also juggle many people, props, equipment and schedules in production.

Supervisory Skills – the associate producer must be a good leader as they may manage subordinates and be ambassadors between colleagues. Good supervision and leadership skills are paramount for an associate producer to keep the production meeting sensitive deadlines.

The Phases of Production

Development Stage – the production starts with pitching an idea to a studio or executive producer. Then notes are given about the pitch from the studio and all others involved. The outline of the TV show or film is produced and turned into a script. After the first draft of the script, the studio and producers will give notes to finalize the script. Once the script is completed, pre-production begins.

Pre-Production – this phase happens after a script is approved and before the camera rolls. This is the time to confirm a preliminary budget and schedule for production. Next, the production team heads are hired, the creative planning begins, storyboards are created, and graphics conceived. The budget and production schedule are refined based on the production team heads experience and knowledge. Then, the associate producer will secure rentals, any props needed, file for permits and confirm a location for the shoot. The rest of the crew is hired and tasked based on the production schedule. Finally, the cast and crew will rehearse before production begins. Once pre-production is complete, the camera rolls and the real action begins.

Production – this involves the actual shooting of the TV show, media production or film. This phase captures all the scenes from pre-production. The associate producer is responsible for making sure crew is present and punctual, props are managed properly, and any media is cued for the producer. B-roll will be shot to supplement the production during post-production and editing. Once all footage has been collected post-production begins.

Post Production – all footage is “in the can” and ready to be assembled. This is the time to add anything including images, music, color correction and special effects. The footage is edited into a final product and the TV show, media production or film is given a test screening to identify any issues and make it ready for syndication.

Our digital video and media production associate and bachelor’s degree paths can lead to a variety of entry points in the video and film production industry. We help you build a strong visual portfolio for your career search through time in our studios.

Contact us today to learn more about the digital video and media production associate and bachelor’s degree. Starting a rewarding career as an associate producer is closer than you may think!