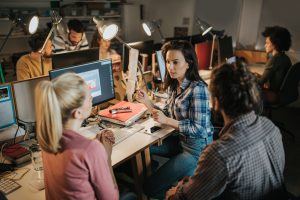 When you take in a film, television show, see a memorable advertisement, or even play a video game, there are a lot of people that work to create the media. One example would be that of a motion graphic designer. Anytime you see any of the media listed above, you are seeing someone’s work in motion graphics, even if it is not immediately obvious to you. Today, we are going to take you through what is meant by ‘motion graphics’, a couple early innovators in the field, the various components, the software needed to do the work, and various mediums that utilize it every day.

What is Motion Graphics?

Some may define motion graphics as graphic design, but with an animated element to it. It dates back to the 1800s but wasn’t defined as its own type of media until 1960 when John Whitney founded Motion Graphics Inc. He was an animator who became known for doing the title sequences for several films and television shows. One of his most famous title sequences is for the Alfred Hitchcock film ‘Vertigo’ (considered by many critics to be one of the greatest films of all time). His effects were based in analog, mechanical techniques until the 70s, when he moved over to digital processes since they became faster.

Another important early figure in the field (who collaborated with John Whitney) was Saul Bass. He was known for having deceptively simple designs that clearly communicate their intent. His most famous classic work is probably for the film ‘Psycho’ or the Frank Sinatra vehicle ‘The Man with The Golden Arm’.

What are Some Examples of Motion Graphics?

Motion graphics can be used as part of online or television advertisements and commercials. It is used as part of the title and end sequences in television shows and films. They can also be used in scenes when text is featured onscreen as part of the story. One example might be the text readout from inside Iron Man’s helmet in the Marvel movies. They also feature prominently in the use of credits or subtitles. In the business world, motion graphics spruce up websites or in business presentations to add some excitement to stale charts and graphs.

Breaking Down the Process

There are several components in motion-based graphics. Some of these elements include scripting, design, audio (anything from voice talent to music), and animation. A good final project will be a seamless synthesis of these various elements. With this being the case, someone wanting work in this field should train in not only in graphic design or animation, but also have a rich understanding of color, text, music, and sound. On top of all that, someone wanting to dive into this field in the 21st century, needs to keep up to date on all the latest software in order to stay ahead of the curve in a competitive marketplace.

When putting a motion-based graphic together, it is imperative to start with a plan. Writing a creative brief, putting together a solid script, drawing out how you want all the animations to go, these are all things that can help the process along and keep everyone involved on the same page.

How to Plan for Motion Graphics

When you put together the plan for your motion-based graphic, one needs to consider how much will be purely onscreen text, how much will be voice-over, how much will utilize both at once, and what percentage will rely solely on visuals. There are many options within those, and it will be up to you and your team to determine what blend will best accomplish your goal. For example, onscreen text can be powerful, but it is important to not overdo it since too much text can overwhelm viewers. Also, when it comes to voice-over, it is important to keep it punchy. Too much voice-over can make a presentation feel dry. With animation sections, it is to dazzle a viewer, but remember you can overdo. Too much it with the animation so that someone doesn’t know where to focus their eyes.

Once you have an idea of where you want to go with motion graphics, it is important to then storyboard. This is a method of putting down your ideas in a visual way that can tell the story of how your project should go. This comes down to making frames on a whiteboard (or something similar), including text to go with the frames and fully demonstrate the way in which the story should unfold. Also, what the viewer should take away from the piece.

From Storyboard to Design

Next up will be taking your storyboard concepts into actual design. This is where all the various elements begin to come together, the visuals, the voice-over, basic animation, and so forth. It can be expected, at this stage, that a couple things from the story-boarding might not actually work. It is important here, to pivot creatively to find solutions for such problems so that everything is fine-tuned going into the final animation stages.

Finally, what happens are the final stages of animation. Focus on the style of the actual animation. Another aspect to keep a watchful eye on are transitions and pacing. Make sure that if there are multiple scenes that they move from one to the next in a way that makes sense and is not jarring. Also, make sure that the whole piece doesn’t drag.

What Software is Used in Motion Graphics?

While innovators like John Whitney first began utilizing computers to aide in their graphic work decades before, it wasn’t until the 1980s that a software program like Quantel became commonplace in television studios for the use of motion graphics. Workstations developed by Quantel such as HAL and Paintbox became the standard, while early digital effects machines like the K-Scope became common in the industry as well.

The home computer brought change to the industry. Subsequently, the developing powerful and user-friendly software would help to create options. Even now, there are still some designers that prefer Photoshop for their motion graphic work.  Many consider Adobe After Effects the industry standard. For the modern designer, having knowledge of Photoshop, After Effects, and Maya is a good start.

What Kind of Work is Available?

There is a never-ending amount of work available to someone wanting to get into the field. There is work available in businesses and corporations that utilize it for communicating with their customers. Companies may also need work in-house with their employees, or to make presentations to other businesses.

Also, website design is an important example of how these skills can be used. Almost every business needs a website as does anyone breaking into entertainment and that creates a wealth of opportunity for someone in motion graphics.

Motion Graphics in Television and Film

Television and film are both major players with this artform. In fact, one can argue that motion graphics are now in use more than ever. For every new show, motion graphics are necessary for their title sequence, credits,  subtitles, and text on screen during scenes. The same is true in film. With so many options in movies, studios are responding with more and more film content for our screens and devices. This means more and more potential work for you.

Interested in learning more about motion graphics? IPR’s digital video and media production associate and bachelor’s degree programs can lead to a variety of entry points in the video and film production industry. We help you build a strong visual portfolio for your career search through time in our studios.

Contact us today to learn more about the digital video and media production associate and bachelor’s degree. Starting a rewarding career as an associate producer is closer than you may think!