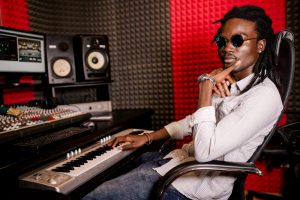 Interested in making music? During an audio production program at a vocational school, you will learn about synthesizers and how to use samples, oscillators, LFOs, filters, envelope generators and loops. With these audio effects, an entry-level audio engineer can make unique sounds for music and visual media.

What is a Synthesizer?

An electronic keyboard that produces sounds by generating and combining signals of different frequencies. The synthesizer can copy any sound, mimic a traditional instrument and create brand new sounds. Synthesizers can also be used in conjunction with computer software that makes music.

Sampling is the process of incorporating a track from a previously recorded song into a brand-new song. The amount used varies from a single riff to an entire verse. Sampling went mainstream in the 80s with hip hop. DJs began to manipulate and scratch the records that they played to make new loops, beats and sounds. Once sampling became popular and groups where cutting records with samples of other artists without permission, the legal community got involved.

To legally sample another musician’s work, the sampling artist must obtain a sample clearance from the original owner of the original copywritten recording. It is important to note that covering a song does not infringe on the owner’s copyright, as long as the song is not modified in any way.

When is a Sample Clearance Required?

What is Fair Use?

Fair use is the right to copy a portion of a copyrighted work without permission since it is only used for a limited purpose like educational use, satire work or parody, according to the Nolo Press.

Oscillators generate sound by moving back and forth. The circuitry changes between two states very quickly. This change generates a waveform that can be amplified and used as a sound. The output of an oscillator has three basic parameters: frequency, volume and waveform. Oscillators produce repetitive waveforms measured in Hertz. The faster the oscillator vibrates, the more cycles and the higher the frequency will be. Without oscillators, the synthesizer will make no sound. Depending on the number of oscillators the synthesizer has, waveforms can be mixed together.

There are a few common oscillator waveforms, including pulse, saw, sine, square and triangle waves.

Pulse Wave – half as wide as a square wave

Triangle Wave – sounds in between a saw wave and a sine wave.

A Low Frequency Oscillator (LFO) is a source that produces a repeating signal. LFOs are a special kind of oscillator at frequencies lower than the human ear can hear. The LFOs are used to modulate parts of the synthesizer. They can modulate the pitch of an oscillator or the frequency of a filter. The most important parameters for programming an LFO include waveform, frequency, destination and amplitude.

A filter is an electrical circuit that emphasizes or eliminates some frequencies from a signal. More simply put, a filter takes in a signal and gives back a transformed signal. What comes out is usually less than what goes in. The parameters of a filter include its cutoff frequency and its slope.

Slope – how sharply the filter reduces or eliminates frequencies past its cutoff frequency.

The most common types of response curves that a filter will use in a synthesizer include low pass, high pass, band pass, and band reject.

Low Pass – eliminates all frequencies above the cutoff frequency.

High Pass – eliminates all frequencies below the cutoff frequency.

Band Pass – eliminates all frequencies that are not within a specified band on either side of a center frequency.

Band Reject – eliminates only the frequencies that are within a specified band on either side of a center frequency.

EG Trigger Impulse – the cycle begins on the firing of a trigger impulse.

The most common type of envelope generators is the ADSR or Attack, Decay, Sustain and Release.

Decay Time – from the peak it decays to the sustain level.

Sustain Level – the sustain level is kept as long as a key is pressed. There is no specific time period, it ends when the key is released, and the note ends.

Release Time – the time it takes for the sound to return to zero or silence.

Loops are short pieces of music that are around 7 to 30 seconds in length and edited to loop seamlessly form the end back to the beginning. In music, a loop can be added to a track end to end as many times as needed to play within a song.

To make a loop that is pleasing to the ears, it is important to create a groove and offer enough variation, so the listener is not annoyed by a repeating track that never ends. Loops can be chopped into pieces and rearrange to add variety.

Waveform – a graph that displays amplitude over time. Waveforms are the shape of a signal represented by a wave.

Volume – the degree of loudness or the intensity of a sound, from the maximum volume to silence.

Frequency – the speed of vibration which determines the pitch of the sound. Frequency is measured in Hertz and is the number of wave cycles that occur in one second.

Destination – the sound parameter that is modulating.

Amplitude – the size of the vibration which determines how loud the sound is. Amplitude is important to balance the loudness of sounds.

Did learning about synthesizers and sound design for making music interest you? The audio production and engineering program  at the Institute of Production and Recording is an occupational degree program designed to train producer engineers who are entrepreneurs, musically and technically creative, and proficient in modern recording technology and technique. The audio production course is an in-depth study of audio synthesis and its creative application in sound design for popular music and visual media. Students combine samples, oscillators, filters, LFOs, envelope generators, and effects to create unique sound sets for a wide variety of media. Throughout the program, students are involved in hands-on exercises and real-world studio projects that enable them to apply their knowledge and refine their skills.