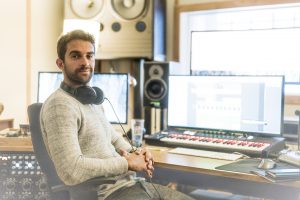 Once upon a time, recording studios were a rarity and getting to make music in one was a lofty and far-off dream for most musicians. These days, quality studio equipment prices allow for dedicated home recording studios.  There are a few key components that connect both studios of the past, as well as modern studios. Today, we are going to take you into the basics of what tools and equipment is needed to set up a studio.

What Are You Recording To?

Outside environmental factors pollutes the audio data being imprinted when recording music. The recording studio controls these factors to get the best possible capture of the performance.

The earliest method of capturing a performance in a recording setting was with wax or disc and the first recording studio was established around 1890. Musicians (sometimes whole orchestras) would gather around the bell of a horn that would pick up the sounds produced. The sound travels through a primitive sort of membrane, which then transfers to the wax disk or cylinder.

This process got better as equipment developed and improved, and eventually metal masters could be made to make reproduction easy. This lasted until about the 1940s until magnetic-coated tape was introduced. This quickly became the preferred tool for capturing sound (there are still studios that swear by it even today). Tape got thicker as multi-tracking in recording was possible. Starting with two tracks, then four, then eight, then sixteen, and so on. Engineers were able to record material on a digital tape, and then were later were able to save the music on a hard drive.

Another integral factor is what is picking up the sound. Mentioned earlier, the first recordings utilized horns as the tools for this purpose. These days, there are plenty of microphones options to choose from to capture sound in recording sessions.

Ribbon: These were once the standard in early recordings and have made a bit of a comeback due to what is described as their “warm” sound. They get the name  ‘ribbon microphones’ because they contain a magnetic, thin metal ribbon inside of them.

Condenser: Condenser microphones are typically a bit sturdier than a ribbon microphone, but far more sensitive than a dynamic mic. The sound waves move a diaphragm that connects to a  back-plate.

Dynamic: Dynamic microphones are, by far, the most rugged and economical choice of microphones. In dynamic mics, inside the microphone assembly, a thin piece of material attaches to a thin coil of wire. A magnetic field suspends it and when it vibrates from sound, which causes an electrical surge. These are as popular in the humblest studio as they are in large, major-label studios.

As multi-tracking developed, technology has been giving rise to all kinds of artistic options and creative tools. Some of these include being able to decide whether your left or right speaker or headphone would hear a particular sound, being able to pan between the left and right channels, and having sounds fade in and out.

Space to Hold the Equipment

While recording, engineers need to track or monitor what is being recorded. There will be speaker monitors in the room where the engineer is listening to the playback of a recording. Monitors also allow you to hear what is happening so you will have an idea of what the recording will sound like. Headphones are integral monitoring tools, but also necessary in the room where instrumentalists or vocalists are laying down tracks.

The most basic recording effect is reverb. Initially, the microphone would pick up on the ambient sound of the room. Over time, many kinds of reverb became available in the studio, including spring and plate. Compression and delay are also important types of effects. At bare minimum, every current recording set-up has these three types of effects available, but there are many, many more.

Did learning about studio tools and studio equipment interested you? The audio production and engineering program  at the Institute of Production and Recording is an occupational degree program designed to train producer engineers who are entrepreneurs, musically and technically creative, and proficient in modern recording technology and technique. Throughout the program, students work on hands-on exercises and real-world studio projects that enable them to apply their knowledge and refine their skills.