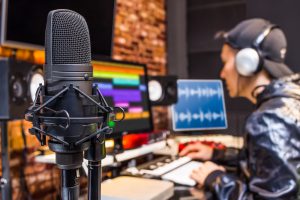 Auto-Tune helps singers correct bad notes and wavering pitch. It is also known for its robotic vocal style that has dominated music in the past two decades. Although controversial, auto-tune is meant to help vocalists from doing take after take to make every bit of the song sound pitch perfect. It is intended to fix small pitch changes but has grown into its own vocal style.

Controversial from the Start

Since its invention in 1997, it has divided the hip-hop community with critics like Steve Albini, Usher, Daft Punk and Jay Z. Bassist Nick Harmer claimed auto-tune could make musicians stop practicing and create complete dependency on a computer. Of course, this is an overstatement. Touring continues to be the largest money-maker for artists, and you can’t autocorrect bad vocals in real-time in a stadium full of people. You have to be able to sing to tour, unless you lip sync your songs to crowds. Based on the Milli Vanilli debacle, few people are willing to risk that scenario. Auto-tune allows hip hop artists to violate the rules of singing. Auto-tune allows a melody in the background to blend into the rapper’s voice creating the illusion of song. The hip-hop community has always played with sound, inventing record scratching, the human beatbox, and utilizing the vocoder. With new advances, they have integrated melodies into the human voice for rap.

Today men like Leslie Braithwaite, Manny Marroquin, and Jaycen Joshua produce the best work in the genre and work with some of the biggest artists in hip-hop. While there is the talent in front of the microphone. These engineers are the talent on the other side of the microphone.

Leslie Briathwaite – graduate of a vocational school, he has an impressive list of Grammy awards for his audio-engineering, production and composing of hip hop and rap music. Leslie has mixed and mastered more than 400 songs from artists like Cardi B, Chris Brown, Usher, and Pharrell Williams to name a few.

Does technical prowess deserve respect? Mastering the blending of human voice and melody is a serious issue. Producers and audio engineers work for hours to achieve the sound they want in a recording. Grammys are given for best engineered album, best surround sound album and best music video. All of these awards show respect for technical mastery. This would seem to run counter to the critics that claim auto-tune requires no talent and is a crutch for those lacking talent. Awards in music have been given for technical skill since 1959. Only the best and well-educated sound engineers have achieved these goals.

Has Auto-Tune been Abused in the Hip-Hop Community?

The key issue appears to be whether this one technical trick has been abused in the hip-hop community. Purists claim the melodic tunes in the background aren’t needed during rap albums. The poetry itself should be enough. The bounce (a New Orleans beat) has been sampled many times by rappers like Drake and Cardi B. An example would be the use of this material in the song “Bickenhead” by Cardi B. The original artist, Devious cleared the sampling and was enthused by her use of his material. The new song relies on Cardi B’s talent to bring old material into something new. This is both poetry, musical and technical talent. It is easy to make light of these collaborations, but the reality is that hit albums don’t fall off trees.

Being in the music community requires training, dedication and education. The real power of artists like Usher, Cardi B and Snoop relies on well-trained, well-educated and highly capable audio engineers. The best of these people went to technical and vocational schools to master their craft. You too can aspire to change the world, one note at a time.

Is Auto-Tune a useful tool? Is it abused? Auto-Tune can correct the pitch of a singer’s voice or it can make a poor singer sound better. Some people like the imperfections and the sound of live music. Others want a crisp and clean voice. The beauty is in the eye of the beholder. Vinyl is so popular because of the feedback and sound that it makes when played. To each listener, Auto-Tune might sound good or it might ruin the vocals. One thing is clear, these types of tools are only becoming more abundant and Auto-Tune is here to stay.

Interested in learning more about how Auto-Tune works and what is is? The audio production and engineering program  at the Institute of Production and Recording is an occupational degree program designed to train producer engineers who are entrepreneurs, musically and technically creative, and proficient in modern recording technology and technique. Students learn the fundamentals: acoustics, audio signal flow, recording, music theory, digital audio workstations, MIDI sequencing, and music and entertainment business essentials. Throughout the program, students are involved in hands-on exercises and real-world studio projects that enable them to apply their knowledge and refine their skills.