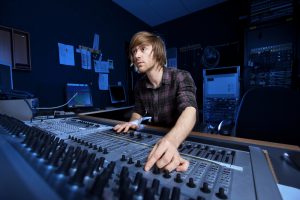 Interested in becoming an audio engineer? Understanding the role of audio mixing is an important aspect of creating a successful album. Mixing an album well can launch artists and be mutually beneficial for the engineer.

Geoff Emerick, Abbey Road‘s chief audio engineer helped The Beatles reach the stars. Bruce Swedien made Thriller scary good. Nigel Godrich made Radiohead’s OK Computer a legend in its own right. Eddie Kramer might be the greatest living rock and roll audio engineer. Young Guru is taking hip-hop by storm, engineering tracks for the likes of Jay-Z. Finally, Deadmau5 is re-engineering EDM with minimalistic audio engineering. All of these legendary audio engineers show how mixing can influence an artist and audio engineer’s career.

Not far from the St. John’s Wood tube station, Studio Two‘s modest appearance belies its history. The simple white walls, two-story format, and Victorian lanterns surround music’s most legendary recording studio. Birthplace to The Beatles’ Abbey Road, Studio Two renamed itself in 1970 after its most famous production. But Abbey Road is famous for more than the iconic Beatles album. The 1969 record is a look into the ways that great mixing and audio engineering can make lasting legends.

Studio Two is known for its clarity and warm tones, partly due to the studio’s acoustic signature and technical design. A warm dash of reverb works like magic to produce the distinctive Beatles sound. This sound is so distinctive that it is contractually forbidden to sample the acoustic signature of this room.

Probably one of the most important aspects of Emerick’s recording is his use of equipment. The prototype TG12345 recording console changed the game entirely. This device allowed artists to enhance their bass, clean up distortion, and smooth the entire album. Geoff Emerick, Abbey Road’s chief audio engineer, believed the console allowed “everything [to sit] together a little easier” on the album.

Swedien’s famous “Acusonic Recording Process” was a magical cure for recording woes and achieved great results. The Acusonic approach allows for unlimited track counts. This means Swedien could avoid wrecking transient response on tape. Avoiding this effect is one of the most impressive technical feats of the album.

In the fall of 1996, Radiohead occupied the famous St. Catherine’s Court manor home to begin recording.  Using the manor gave Radiohead the open feel and organic sound the band needed. The resulting album, OK Computer would go on to become one of rock’s greatest albums of all time.

Like Abbey Road, the venue played a major part in engineering  the album’s sound. The open air, space and acoustics gave Radiohead room to build their sound. Sampling acoustics on a stone staircase and spreading drums and amps throughout a series of linked bedrooms were unique ways the band found their sound. In addition to this, the band also recorded monotone vocals from a Macintosh computer.

Radiohead’s audio engineer Nigel Godrich notes that the band’s eagerness to experiment with new sounds was something unprecedented–there were “no constraints“.

Edwin “Eddie” Kramer is perhaps the greatest rock audio engineer alive today. Known for his work with popular rock artists in the 1960s and 1970s, he has helped to create revolutionary records.

Likewise, Kramer’s interest in music also started at a young age. In 1962, Kramer shot to fame by producing incredible artist collaborations. By the late 60s, Kramer’s resume included work with the Rolling Stones, Jimi Hendrix and The Beatles.

Legends in the Making

Hip-hop is all about personality and dramatic characters. But beneath the glitz of the big name stars, people like Young Guru embody the growing popularity of audio engineers in their own right.

Young Guru is one of the most influential and successful hip-hop audio engineers today. Young Guru is best known for his work as Jay-Z’s audio engineer on tracks like “Empire State of Mind” and “X”. His resume includes work with Kanye West, Beyoncé, Ludacris, Rihanna and Mariah Carey.

Young Guru became interested in mixing and producing from a young age. He refined his skills as one the D.C. area’s top club DJs in the 90s. Later, Young Guru pursued audio engineering at a university. Young Guru met Jay-Z after the audio engineer moved to New York in the late 90s. This meeting sparked one of hip-hop’s longest engineer and artist collaborations.

The greatest audio engineer in hip-hop history, Young Guru’s work is described as “visionary” by those in the field. His ability to produce unique tunes for artists is unparalleled.

Deadmau5 is an example of the musician-engineer-producer trinity. Deadmau5 began mixing and producing music from a young age, releasing his debut album Get Scraped in 2005.

Deadmau5 breaks the mold with his production methods, while working primarily from his (well-equipped) home studio. Deadmau5 is one of few artists in EDM that handles the creation and editing process themselves. Deadmau5 only rarely enlists outside help to finish his tracks.

Deadmau5’s style is minimalistic. He’s famous for his ability to mix with fewer tracks and edits, along with an eye for detail. It is because of his arrangement that he is one of the best audio engineers today.

Great audio engineering transforms songs and forges something greater than the sum of its parts. Abbey Road, OK Computer, and Thriller are just that. These well-engineered albums are some of the best of all time.

Audio engineers like Young Guru and Eddie Kramer are not often in the spotlight compared to their artists, but their surging popularity is undeniable. For musician-engineers like Deadmau5, the path forward is clear–mix, produce, and perform.

Did learning about audio engineering legends interest you? The audio production and engineering program  at the Institute of Production and Recording is an occupational degree program designed to train engineers who are entrepreneurs, musically and technically creative, and proficient in recording technology and technique. Throughout the program, students work on hands-on exercises and real-world studio projects that apply their knowledge and refine their skills.

IPR is an Apple Authorized Training Center for Education (AATCE) in Minnesota, which is certification training in Logic Pro X. Logic Pro X instructors are Apple Certified Trainers, chosen to lead these courses because of their industry expertise.