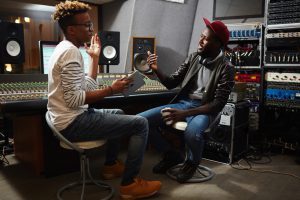 When you walk into a recording studio, whether it is one of those huge, legendary spaces or a humble DIY set-up, there are several parallels. A few factors are necessary in any recording studio to achieve desirable results, no matter the size of the space or amount of money spent to put it all together. This imagines you have been invited to listen in on a session at a mid-level recording studio and go over what it is you will likely see there.

Arriving at the Recording Studio

You have word that your favorite artists are going to be laying down some verses on a track over at the local recording studio. It has ended up being about a ten-minute walk from the train to the buzzer at the door of the building.

When you enter the building, you notice that there’s a red light-bulb on. You decide to wait until the red light turns off, since you know this means that a take is being recorded. Once the light changes, you knock at the door, and they let you inside.

When they let you in, they greet you and invite you to wait for a bit in this lounge that separates the control room from the hall. They inform you that the main reason for this lounge is so that there is a space separating the entrance from the hall into the control room, so that sessions aren’t interrupted by someone coming in. You then ask, why bother with the red light if there is a waiting room? The answer they give is that, the red light helps makes sure that someone doesn’t open the door and get loud or cause any other kind of distraction to those in the control room or the artists, especially since the noises made could be picked up by the mics all the way in the main room if the sensitivity is being cranked enough.

In the Control Room

They invite you into the control room to see what happens in there. There is someone standing, taking everything in, directing others in the room to make small adjustments before the next take. There is a window that offers a view into the main recording area where the artists are doing their vocals and the man standing is talking to them through a microphone that they can hear through headphones they have on.

You understand that this person standing is the producer on this track. The microphone he is speaking into is positioned off to the left of an area that looks something like a spaceship command center. This is the mixing board and positioned in front of it is the mixing engineer on the session, who the producer is asking to raise to cut out a bit of the high-end on the studio mic that one of the artists is rapping into because the words are sounding a little brittle.

There are two sets of monitors in the control room to hear the track playback. One set of monitors sit on the left and right side of the mixing desk. These are measured to the inch that they sit exactly proportionate to the center of the mixing desk, where the mixer’s chair is.  There is an assistant to the engineer whose job is to make sure all equipment is running smoothly and addressing if it does not.

Also, throughout the control room are several rack-mounted devices. They explain that these are things like power conditioners to regulate how much power is being distributed among all the equipment in the control room, their function is to help minimize things like power surges and spikes in the equipment. There are also compressors, pre-amps, a reverb unit, and a digital effects processor. Some of these are for affecting the sound that comes from the main room as it happens in real-time. Others are effects that are used to shape the sounds after they are recorded, when a more fine-tuned mix completes.

Now the producer has the mixing assistant trade out the microphone. During the break, you tour the main recording room. They show you the house drum-kit. Microphones point to different locations on the drum kit. Each mic on the kit has been tested  in order to get the most effective sound that works for many  drummers that come in to play.

There are also tons of guitar amplifiers, guitars, basses, a baby grand piano, various percussion instruments, and analog effects. You notice lots of foam padding where the drums are set up and in the vocal isolation booth. This padding serves different functions. Padding is sound treatment, which acts as bass traps. Also, some are for soundproofing the studio, to make sure that there is no bleed from the other instruments. Some padding absorbs or diffuses non-desirable sound frequencies . All of this helps control the kind of sounds that get picked up by the microphones in the main room.

Now that they swapped out the mic, the artists go back into the vocal isolation booth. The mixing engineer assistant notices that you are looking at a circular object that mounts in front of the mic. They explain to you that this is a pop-screen. Its  purpose is to minimize the amount of popping sound the human voice makes. They explain that they also have software or compressors that  help for de-essing, which helps when a vocalist may put too much emphasis on their ‘s’ sounds.

Where are the Masters Stored?

Before you head out, they show you the two ways that the studio saves recordings. If the recording is being done digitally, they utilize a program like Pro Tools or Audacity.  The digital masters save on a hard drive in the control room and backed up in the Cloud. When they record to tape, reels are stored in a temperature and humidity-controlled  room.

Now that you have had a tour of a recording studio, you head back into the  night, ready to sketch out plans for your own studio.

Did learning about a real recording studio interest you? The audio production and engineering program  at the Institute of Production and Recording is an occupational degree program designed to train producer engineers who are entrepreneurs, musically and technically creative, and proficient in modern recording technology and technique. Throughout the program, students are involved in hands-on exercises and real-world studio projects that enable them to apply their knowledge and refine their skills.