A huge congratulations to all of IPR’s Spring 2014 graduates! This quarter 23 students received their diplomas in IPR’s own Robinson Hall, which proved to be our best graduation ceremony to date. 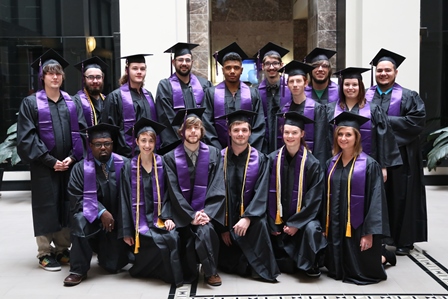 Emcee Mary Jane Alm (a perennial favorite IPR teacher) kept the ceremony moving with her usual eloquence, and instructor Scott Nelson offered astute observations about the next steps after graduation. He also showed this inspiring clip of a Jim Carey graduation speech in Iowa earlier this year.

Additionally, three students won IPR’s coveted ICON award for outstanding achievement; the award is voted on by faculty and given to graduating students who will best represent the school when they become professionals in the field. ICON winners this quarter include Trevor Murchison, Lindsie Heitzman and Mark Straley.

IPR offers associate degrees in audio production and engineering, music and entertainment business, sound design for visual media, live sound and show production as well as two new programs, interactive media and graphic design and digital video and media production. Our next class will graduate October 4, 2014—see you then!